Home / The Next Chapter 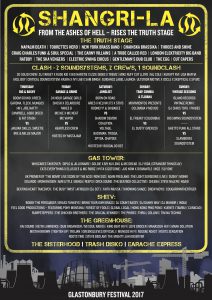 THE SH-AFTERLIFE IS NO MORE. No Heaven. No Hell. Only the waste from last year’s Festival remains.. ..All the things you left behind.

Structures have formed from the scrap, dwellings made of detritus, art from the embers.

A GAS TOWER looms over the site – harnessing the creative energy around it. A symbol of a bygone industrial era, it has reformed here, at the epicenter of the Digital Revolution. 360 degrees of awe-inspiring audio visual action

From the ashes of Hell rises the TRUTH STAGE, where the sounds of the revolution resonate all night long.

The container walls of the CLASH throb in a cacophony of chaos, as the biggest names in underground music collide.

Shangri-la International Television Centre SHITV – triples its transmission by opening all day long for debates and discourse in DIY culture, documentary making and Activism.
By night, it broadcasts the best in UK comedy and live art. The truth will take over your TV.

Shelter is sought inside towers of textiles, pillars of plastic and columns of consumerism. The rubbish is a refuge. Every space becomes a place to party or ponder, be it a tube train, a bus, a skip or a bin. Keep it real, Keep it tidy. 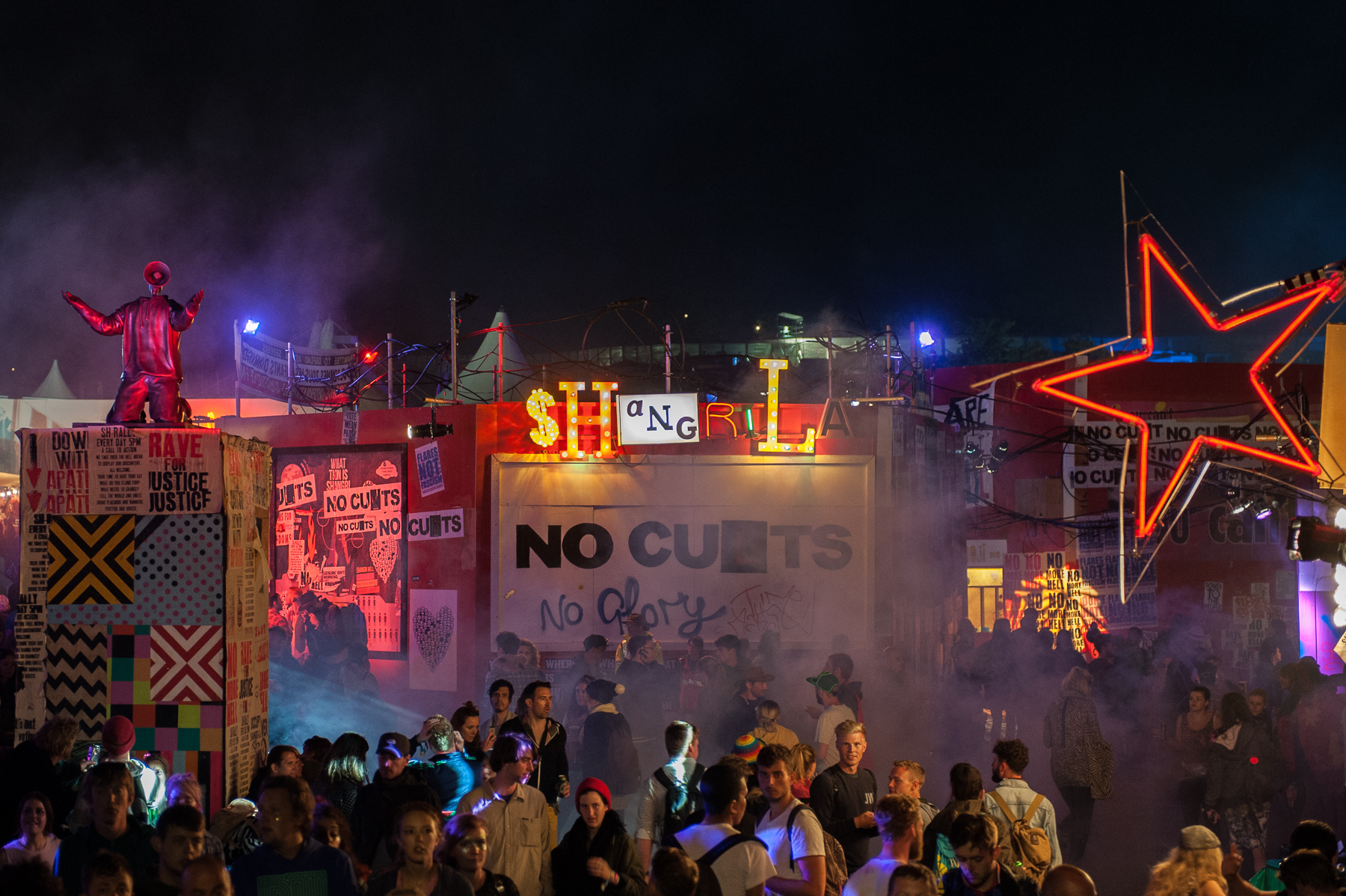 SHANGRI-LA IS THE META-NARRATIVE THAT STRIVES TO ILLUMINATE PROGRESSIVE CULTURE AND OTHER-WORLDLY ENTERTAINMENT.

Shangri-La holds a mirror up to the masses, challenging people in politics and play. Creating conversations, force-feeding the senses, expanding minds and opening hearts. There are No Spectators.

The fantasy field in the furthest corner of the festival has a deep history in outsider art and underground culture. This spirit continues to manifest in original and new ways to inspire the next generation of cultural revolutionaries and amplify the collective conscience.

2008 – 2011 The dystopian pleasure city dedicated to fun was destroyed. Throughout its turbulent history it had suffered a corrupt administration, a rebel overthrow, a deadly virus, a failed colonization, even hungry aliens, but STILL the people continued to rave. Unwilling to save their world from destruction, the inhabitants of Shangri-La were annihilated only to continue their journey through the Shafterlife. Heaven & Hell, but not as you know it…

2013 – 2015 Here in limbo, they explored a myriad of contemporary sins and the flinchingly realistic horrors of Shangri-Hell HQ – Hell re-branded as a shiny corporate headquarters. MEANWHILE in Heaven, the Shangrilarians were numb to the needs of others by having too much of a lovely time in its luxury spas and ornate gardens. (and distinct lack of mud). After the political disaster and anarchic occupation of 2015, the finale of this four-year series comes to a dramatic close.

2016 The people of Shangri-La have lost their voices amongst the deceit and distractions of the mainstream media.

A new power resides over the this sensational, subversive city now that the media has gained full access to its inner workings and everyone’s personal lives. Shangri-Hell International Television has the monopoly on all media outlets, plus a new HQ to create more mind-controlling trite to make you feel better about yourselves.

But with the increase of media influence and technologies, A NEW MOVEMENT OF PEOPLE POWER IS RISING. Using art, music and a fuck ton of “likes” the people are claiming back their voices and power, hacking into the systems that control them, seeking the ultimate truth…

To get the latest updates